Why do you have five dogs??? 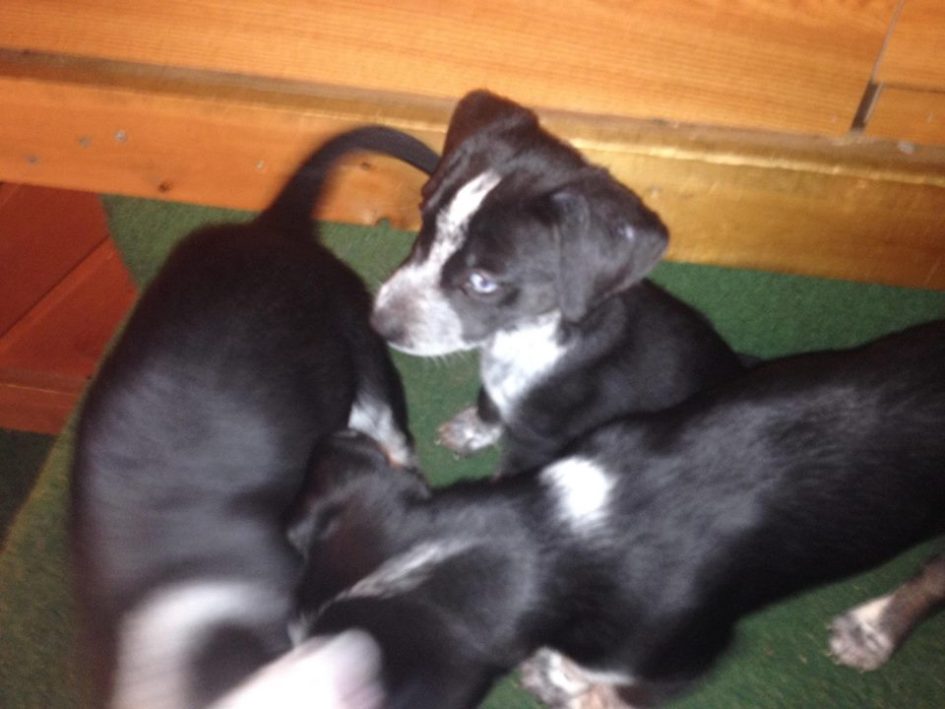 Some people wonder why we have five dogs.

My wife however, loves dogs.

She says they are a better judge of character than people.

In fact, she says the only reason she agreed to go out with me was because her dog liked me.  This particular dog was such a watch dog that she actually went through a plate glass window, twice, because she didn’t like the UPS delivery guy.

When I showed up Maddie, the dog, (wife’s name is Angie) ran up to me while I was sitting on the porch. She sniffed me a few times, (again, the dog) and promptly sat on my lap…

I didn’t know it but Angie was waiting for me to get bit.  You would think she should have warned me but I guess it was a test I didn’t know I was taking.  Luckily I passed, and didn’t get bit.

Maddie is no longer with us.  Now we have a Siberian Husky, named Aldrek, that my son just had to have.  We actually drove 6 hours into Ohio nine years ago to get this pup.  Don’t ask how many times Spencer fed him. Lol.

Anyway, Aldrek seemed to want a playmate so a year ago last Christmas Eve I saw online, a shelter in Kokomo, that had a Dalmatian.  We ran up there and got her.  Her name is Molly.  The shelter, Pals for Paws, (which I would never recommend based on how they handled this) told us that she was crate trained, could only eat the expensive food they sold or got sick, and the big one: She was fixed…

When we got her home, surprise, surprise, surprise…  (a little Jim Nabors and Gomer Pyle humor since the Indy 500 was yesterday) She did not like a crate.  Surprise number two, the expensive food made her sick. She actually prefers Purina Dog Chow.

Her and Aldrek hit it off and a few months later I noticed she was getting fat.  I told Angie maybe we needed to cut back on the food a little.  She laughed and said “I think she’s pregnant”.  Surprise number three…  She wasn’t fixed either!

I don’t think one thing that shelter told us was true, but that’s a story for another day.

In July of last year we had 12, yes twelve, half Siberian Husky half Dalmatian puppies.  Both breeds are pretty high energy so in researching them I found a pretty accurate description.  It said these hybrid pups are just like other puppies, only these will be puppies on crack!  They were right.

I helped with ads and Angie found homes for nine of them, only three more to go.  One night as we were getting ready for bed the dogs were acting like they wanted out, so Angie opened the door to let them go once more and a funny thing happened.

Instead of running like crazy, Molly went over and sat in front of the fireplace and the pups all went out and just stopped, sat down, and looked toward the chimney.  Angie went out to see what was going on.  She didn’t holler or yell, she just said, “Doug, you might want to come look at this…”

The house was on fire.

To make a long story a little shorter I’m going to skip the details but we got the fire out.  Still need to replace a 10 foot section of the wall though.  There were 40mph winds that night.  I believe if it had been 10 minutes later and that wind would have hit the flames, we would have lost the house, or if we had gone on to bed, who knows.

A special Thank You to Rich Vautaw for running over and manning the hose as I busted out the stone wall.

Needless to say, those three pups aren’t going anywhere.  Since they saved the house I guess that earns them the right to live there.

Now you know The Rest Of The Story, as Paul Harvey would say.